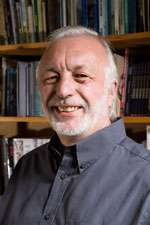 Since 2016 Jim Eldridge has concentrated on writing historical crime fiction for adults. Previously he worked as a scriptwriter and wrote books for children and young adults. As a scriptwriter he had over 250 TV and 250 radio scripts broadcast in the UK and internationally. He was the creator and writer of Radio 4’s long-running KING STREET JUNIOR, CBBCTV’s sci-fi drama POWERS, and was a key member of the writing teams on THE GHOST HUNTER and JULIA JEKYLL AND HARRIET HYDE, as well as many other TV and radio series.. As a children’s and YA author he has had 100 books published which have sold over 3 million copies. They include the best-selling MY STORY series, DISGUSTING DAVE, WRESTLING TROLLS and THE MALICHEA QUEST series.

Jim Eldridge was born in the Kings Cross/Euston area of north London in November 1944. He left school at 16 and did a variety of jobs, before training as a teacher. He taught during the 1970s in disadvantaged areas of Luton, while at the same time writing. He became a full-time writer in 1978. He lives with his wife in Kent.

To get any of Jim’s books, order through the publishers at their websites, or your bookshop, or www.amazon.co.uk

You can also read reviews of Jim’s books at:

To get in touch with Jim, e-mail him at: jimeldridge@jimeldridge.force9.co.uk

For his children’s and Young Adult books, Jim is represented by Hilary Delamere at The Agency, London, UK.

For his adult fiction, Jim is represented by Jane Conway-Gordon.